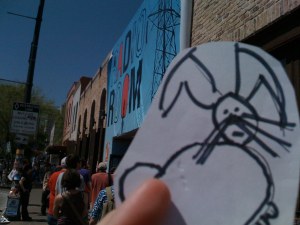 i keep alternating between exclamations of ‘i can’t get over how beautiful it is outside!’ and ‘i can’t believe how much music is going on!’. downtown austin is like a big, sunny theme park of indy music for hipsters. the streets are closed off, everyone dresses like this is bedford avenue, and there’s music coming from every possible angle (reminds me of what the hallways at willie mae rock camp sounds like, bands just bleeding into one another, total rock bliss).

forgoing badges and wristbands, i’m at the mercy of the free shows–which there are plenty. some bands i recognized (thanks to the schooling i got by my friend emily, who made me a sxsw sampler before i left), and some bands were brand new to me. all of the venues are spitting distance from one another, so the name of the game is to wander from venue to venue, watching whoever you please.

one afternoon and three venues later, here’s what i got:

Loney Dear (reminds me of what Charlie Brown may sound like if he was in a darling-of-college-radio type band–or maybe it was just the stripes?)

Fol Chen (synth pop rock, with vocals that channel Prince, and a trumpet thrown in for good measure)

Akron/Family (a rambling jamboree of drums, shout/chants, with some beat machine esque loops–not to mention the best dancing i’ve yet seen).

and, just when i thought hunger would win out, we stumpled upon a tamale wagon (i say truck, one of the austinites i was with said wagon), where i ate vegan sweet potato pecan tamales and nearly died of goodness. 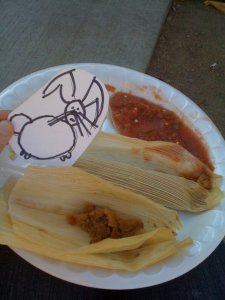 One thought on “the pains of loney fol chen family”