I’m told that sxsw comes with some magic–a higher proportion of coincidence and synchronisity than other places and times on earth. This came true my first night, when, once separated from my friend who wanted to go to see Dan Auerbach of the Black Keys, I didn’t know where to go. All my schedules were at home (oops), and due to all the hipsters on their iphones, 3G was a clusterfuck of uselessness. I couldn’t look up shows, I didn’t know where I was, and I didn’t really have a way of knowing. The one band I wanted to see that night, An Horse, I couldn’t remember where they were playing for the life of me.

So I started to walk down 6th street.

I found myself outside of Maggie Mae’s, where a large banner proclaimed that tonight was a benefit show for Girls Rock Camp Austin, a sister camp of Willie Mae. I met all the rad ladies from rock camps around the world last year at the Girls Rock Camp Alliance conference, and inside the bar, Emily of the Austin camp recognized me with warm welcome. Coincidence? I think not. The GRCA conference was actually happening in Austin the week after sxsw, so synchronisity continued as I bumped into people from girls rock camps in DC, Sweden, and NY throughout the week.

I stayed for two bands–The Besties (an upbeat pop rock band from Brooklyn) and Zolof + The Rock and Roll Destroyer (a dance-y band from Philly that played music like that of a video game soundtrack). Synchronisity continued when I asked a badge holder at the bar to borrow their sxsw guide, where I could look up the An Horse show. It happened to be at Maggie Mae’s Rooftop in two hours.

Eight bucks and a flight of stairs later, I was there.

The guy standing next to me upstairs was holding a megaphone. When I gave him a funny look, he smiled and held the megaphone up for me to see. “It’s for my band, Black Cherry,” he said, sweet as pie and British accent to boot. We talked for a bit about the other bands on the bill, and then, he took the stage as drummer for Black Cherry.

I was hoping to see some bands that just have that vibe of being the next big thing, and Black Cherry totally fits that bill. The lead singer, a Santigold look a like, sang and strutted like a British Karen O, but cooler. Their solid and heady rock, with pop and synth tones, was totally tied together by this woman’s charisma–she jumped around, threw her shoes off, shouted into the megaphone, and made comments like, “It is important to our lives and yours that you remember our name.” Her badass vocals and stylings were completely addicting. This was their first time in the states, they said. 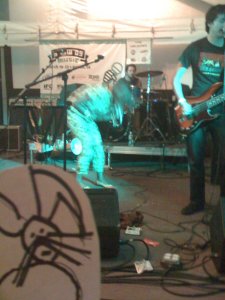 Australian indy rock duo An Horse came on next. The audience had filled up with baby dykes who were ogling lead singer Kate Cooper, and who knew the words to all their songs. 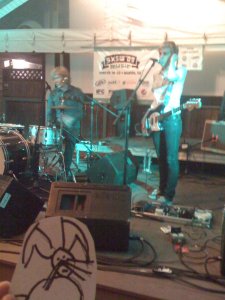 The played a solid set of songs from their record Rearrange Beds, with endearing banter between songs. “I get scared about all these crowds,” Kate said, “I think, what if something happened, like a zombie attack?” They scraped their quiet song due to the loud noise of a band playing on the rooftop of the bar next door (the perils of sxsw).

On the way out, I passed the Black Cherry on the stairs. The drummer and I grinned, and I told him how rad their set had been. “I’m gonna go back to New York and tell everyone about you guys!” I enthused. They all shook my hand and thanked me, and made sure I had a copy of their demo cd. Then I was back out into the loud and hot evening, strutting down 6th street, feeling good.