In 10th grade Health class, our midterm was multiple choice. It was for this test, which included the slim Sex Ed unit we had covered, that Ms. DiCecco told us that there were two questions we could cross out: 88 and 89. I don’t recall much of health class, or Sex Ed that year, but I do remember the two questions we were specifically told to ignore.

89. Homosexuality is natural and acceptable.

There I was, sixteen in a small town, secretly reading any lesbian fiction I could find at the library. And then there’s the particularly snout nosed teddy bear I had getting friendly with since the age of twelve. Here were two important questions to my sexual education. And they were both being skipped.

Now, maybe, you think, some time has passed. Things are probably a little progressive now, yeah? Not so. SO not so. Sex Ed isn’t even mandatory in NYC public schools (something that Planned Parenthood of New York City is currently campaigning to change, thank goodness). 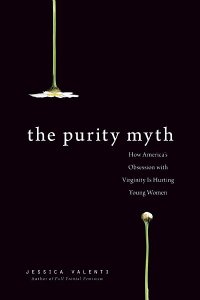 This all came up tonight at an event hosted by Paradigm Shift, New York City’s Feminist Community. Author and journalist Jessica Valenti, of feministing.com and other fame, gave a reading and talk on her most recent book, The Purity Myth: How America’s Obsession With Virginity Is Hurting Young Women. I’m not one for theory or non fiction, trust me, but Valenti’s smart and engaging assessment of what abstinence culture (think promise rings, purity balls, federally funded conferences) means for young women today is brilliant. She tackles the whole idea of virginity, its origins, its sweeping effect on womanhood and the worth of girls in America. (Her talk included such outrageous and unforgettable asides as the abstinence analogy of a girl (never boys, mind you) being like a lollipop–every time they have sex before marriage, they become a licked and poorly re-wrapped piece of candy, never to be new again; or the fact that “vaginal rejuvenation” (that’s reattaching the hymen, folks) is the fastest growing plastic surgery procedure in America). For the hour and a half talk and Q & A, I was totally engrossed , and had the distinct feeling that I was listening to a feminist and writer whose work would be read and discussed and held up as pivotal in the discussion of sex in America for years to come.

Part of the event’s proceeds were generously donated to the beloved Willie Mae Rock Camp for Girls, an organization which is hopefully giving girls back some of the self-esteem they’re robbed of in a culture that’s constantly putting them down.